The Geforce RTX 3060Ti really exists and should arrive maybe at the same time as the RTX 3060, i.e. at the end of October.

Beyond the GeForce RTX 3070, there were leaks and rumors about several other cards. First of all the GeForce RTX 3080 with 20 GB memory, but also a GeForce RTX 3070 Ti and a GeForce RTX 3060 Ti. Normally, Ti models start to show up in the middle of a generation’s lifecycle. It seemed unlikely that they would be launched so close to the initial launch of Ampere cards … but what’s “normal” in the current year…

This card could be positioned at 399€ (for the Founder) while the 3070 is expected at 519€ with higher prices for custom models. 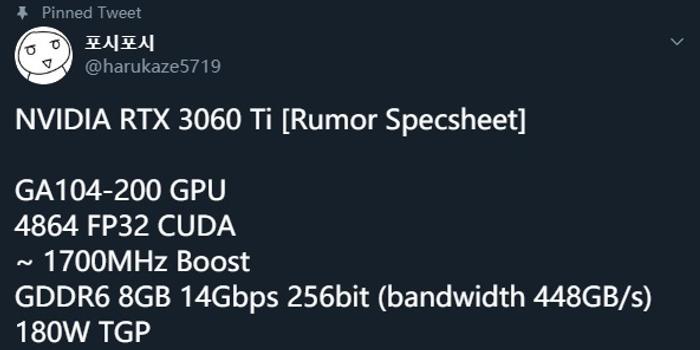 Gigabyte has already had the following references validated for Eurasia: As we revealed here this card could be Nvidia’s best seller with a smaller format and a consumption between 180 and 200W.

The card would come with 8 GB of GDDR6 memory at 14 GHz and a 256-bit interface. This would give a bandwidth of 448 GB/s.
In terms of performance, the current leaks suggest a positioning at the level of an RTX 2080.

As we repeat, it seems that on the 3070, the 3060 and probably the 3060Ti Nvidia does not repeat the same errors in terms of availability.