The big RTX Ampere customs have been listed online on Taobao. At least four customs graphics cards have been listed for the Colorful and ASUS brands. Even if the screenshots also show prices for pre-orders, it is still necessary to be very careful on the subject as Nvidia can still until its announcement modify the data.

On the cards presented in this listing, you will find three references from Colorful, a brand you don’t see too much of here and an Asus reference. As a reminder, a few days ago, Galax had “teased” the upcoming RTX 3080 and 3090.

from bilibili Via Kopite7Kimi / (Image reconstructed by @326powah)

For Asus, the card listed would be a 3090 ROG Strix OC Gaming. 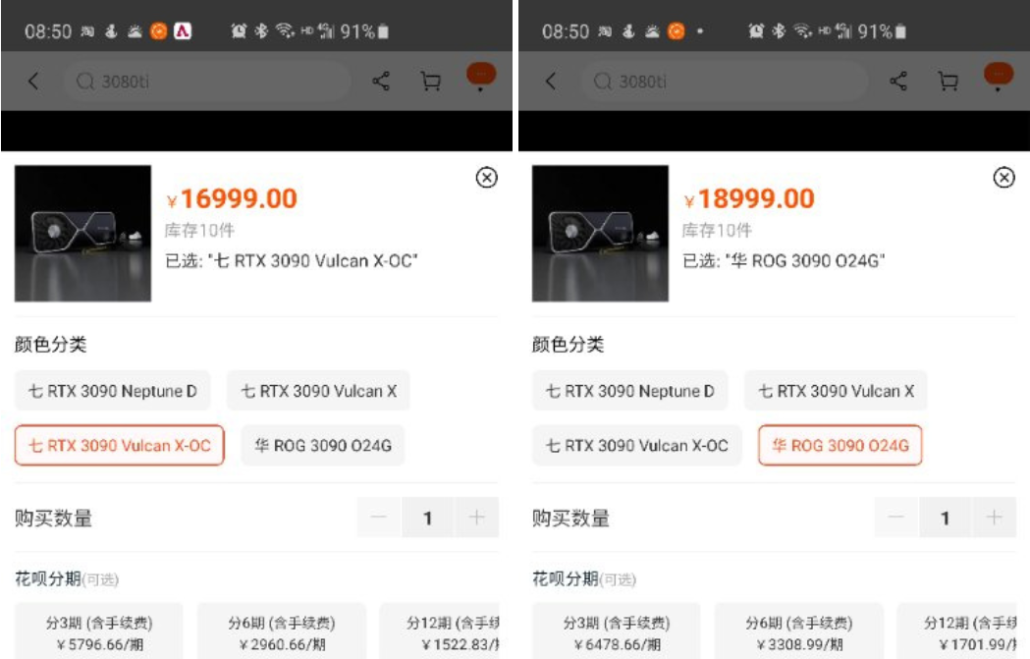 Obviously, if we apply a conversion of 18999 Yuans we get the modest sum of 2325€…Which is very scary considering the fact that the Strix Gaming OC is far from being the top of the range in the Asus family.

As mentioned at the beginning of this article, these prices should not be taken into account because Nvidia will reveal this information at the last moment. Nvidia is used to communicate a “gross” price and then to apply an accompaniment to its partners to lower the public price. At this moment, the amount of this accompaniment has not yet been communicated to the brands.

The most important information would be the arrival of custom models very quickly. Finally, a certain range of customs: an evolution of the cooling system and perhaps some other minor elements. For the ultimate series such as the HOF or Lightning Z type series for example, it will probably take several months.

The RTX 3090 is expected to have ultra-limited availability throughout the month of September, at a minimum. The information available to us suggests that the cards will arrive in the distribution networks around 15 September and that deliveries will be made week by week. When we discuss with the main brands, the quantities that are mentioned for Europe are mentioned in dozens of pieces…